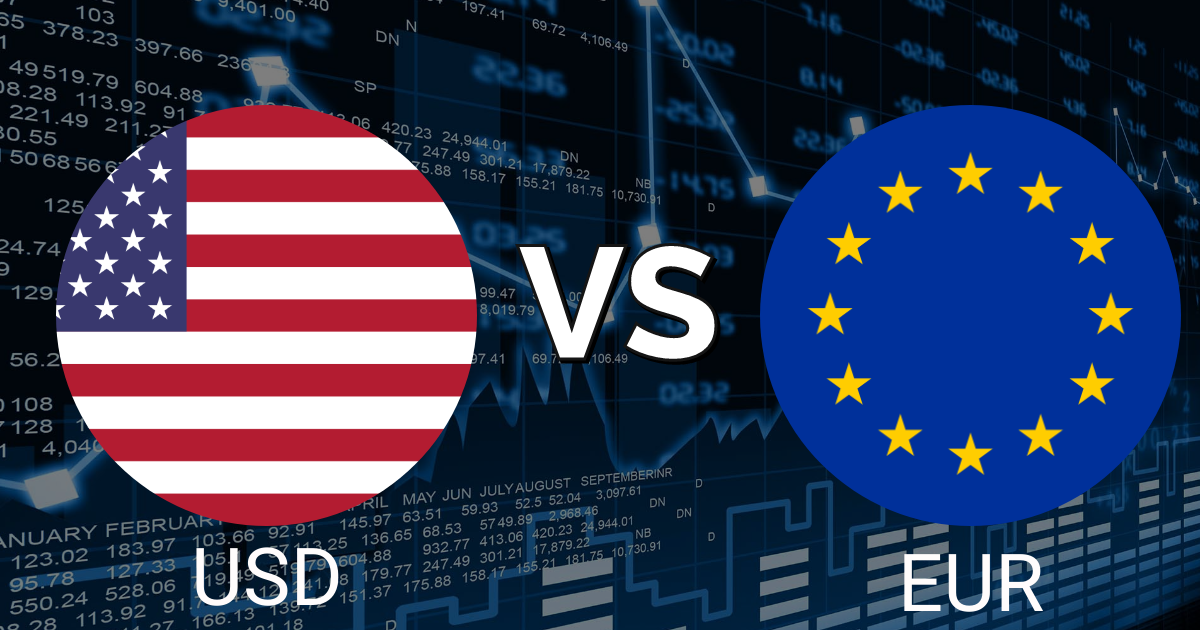 The history between USD and EUR is long and storied. It’s been an uneven relationship. The European Union (EU) is one of the largest trade partners of the U.S. The EU accounts for 15.8% of exports and 18.2% of imports from the U.S., totaling $1.7 trillion in goods, but the trade relationship has not always been smooth, as evidenced by tariffs, disagreements over subsidies, and other disputes.

The euro was formed in 1999 as a noncash monetary unit, and currency notes and coins became available in participating countries on January 1, 2002. After February 28, 2002, the euro became the sole currency of 12 EU member states, and their national currencies were no longer legal tender. The euro is symbolized by the sign €.

The euro was formed in the Maastricht Treaty (1991), an agreement among the then 12 European Community member nations—the United Kingdom, France, Germany, Italy, Ireland, Belgium, Denmark, the Netherlands, Spain, Portugal, Greece, and Luxembourg—which created an economic and monetary union (EMU).

The euro is the most visible symbol of European unity: each day, over 341 million people use it worldwide, making it the second most-used currency in terms of users. The advantages of a single currency are immediately evident to anybody who travels abroad or shops online on a website hosted in another EU country.

You can use the euro in 19 EU nations, including Austria, Belgium, Cyprus, Finland, France, Germany, Greece, Ireland, Italy, Latvia , Lithuania , Luxembourg , Malta , the Netherlands Portugal and Slovakia. Including many of their overseas territories, such as the Azores, the Canaries, Ceuta and Melilla, French Guiana, Guadeloupe, Madeira, Martinique, Mayotte, Réunion, Saint Barthélemy, and Saint Pierre and Miquelon.

The main advantages of the euro are tied to an increase in trade. Exchange of money was eliminated, allowing for more travel freedom. More significantly, the currency risks associated with European commerce were removed. European businesses may now effectively lock in the best prices from suppliers in other eurozone countries using the euro.

The euro also promotes eurozone cross-border investment. Investors in nations using other currencies are exposed to significant currency volatility, which may result in an inefficient allocation of resources. Before the euro, strong businesses in countries with weak currencies still had to pay high interest rates. In nations with stable currencies, less efficient firms enjoyed relatively low interest rates. Currency risk was the main concern in cross-border lending instead of default risk.

The euro should, in theory, assist countries that adopt it to support one another during a crisis. Because they may better distribute risk, currencies of bigger nations are more stable. For example, a hurricane may wreak havoc on a tiny Caribbean nation, but it can also leave a devastating impact on the United States. On the other hand, Florida may call on the rest of the United States to assist in its recovery following a catastrophe. As a result, the U.S. dollar is one of the most stable currencies in the world.

The most significant disadvantage of the euro is a single monetary policy that does not always match local economic circumstances. Parts of the EU are often flourishing with high GDP and low unemployment, while others suffer from long-term economic downturns and high unemployment.

The traditional Keynesian answers to these issues are entirely different. To avoid inflation, overheating, and an eventual economic downturn, the fast-growing nation should have high interest rates. To stimulate borrowing, a low-growth country should cut interest rates. Because of the abundance of unemployed people, countries with high unemployment do not have to be concerned about inflation because they can simply produce more goods.

Unfortunately, when a country has a single currency like the euro, it is not possible to increase interest rates in the high-growth nation while lowering them in the low-growth nation.  During the European sovereign debt crisis, the euro was taken as a sign that economic policy should be adjusted to counteract the negative effects. In countries like Italy and Greece, where growth slowed and unemployment rose, investors became concerned about their solvency, pushing up interest rates.

Because the national government may order the central bank to generate more cash, governments under a fiat money system would not have solvency concerns. However, because the ECB was autonomous, eurozone governments could not print money. Higher interest rates resulted in higher unemployment and even deflation in some countries. It’s reasonable to conclude that the euro exacerbated Greece’s economic downturn.